🎉 THANK YOU FOR 2 OUTSTANDING YEARS! 🎉
Get Shawarmas for a STEAL 🌯 starting from $5.49!
⠀
Come join us for our 2 Year Anniversary Celebration and taste our NEW & IMPROVED SHAWARMAS! 😍 We’re going back to our roots with our new snack-sized 8″ Shawarmas 🌯 — just like how they’re made back at home 🏠 — so now you can ➰ MIX & MATCH ➰ our different flavors to try the best of both worlds!
⠀⠀
❗️ Visit us all week long at both Simsim locations from Monday, September 21st through Sunday, September 27th for outstanding specials you don’t want to miss! ❗️
⠀
🌟 🆕 Shawarmas for a STEAL 🌯
💥 Chicken Shawarmas for $5.49!
💥 Meat Shawarmas for $6.49!
💥 Chef-crafted with our NEW Lavash Bread!
🥩 The same amazing quality and authentic ingredients as always!
💥 Antibiotic & hormone-free chicken
💥 Grass-fed beef & lamb
⠀⠀
🎁 ALL in-store orders made during 9/21-9/27 will receive our 2 Year Anniversary Special Coupon to use on your next visit: Buy 2 shawarmas, get one free*! (*Expires November 30th, 2020)
⠀
📅 When: September 21st – September 27th
⏰ Hours: 11AM-7PM daily
📍 Where: Both Simsim locations, addresses below👇
🙌 Come by for Outdoor Patio Dining and/or Takeout!

People always ask us about the difference between Shawarma, Gyro, and Doner. Even though they might look very similar and all are cooked using vertical rotisserie, but there are differences. The main differences comes down to spices, marination, toppings, bread, and sauces.

Gyro is a traditional Greek dish marinated in Greek marination and Greek spices. The form of meat can either be slices or ground. Some places sell a fresh Gyro, and some sell frozen Gyro.The fresh version is made of slices of meat, and the frozen version is made of ground meat. The most common sauce for Gyro is Tzatziki.

Doner is a traditional Turkish dish marinated in Turkish marination and Turkish spices. For the fresh version, it is prepared using sliced meat or a combination of sliced and ground meat. Some places sell a frozen version, but that one is made of frozen ground meat. It is usually served with Pide brad (Similar to Pita), or Durum (Similar to Tortilla)

Shawarma is a traditional Arabic dish marinated in Arabic marination and Arabic spices. It is prepared using meat or chicken. At Simsim Outstanding Shawarma, our meat version is combination of beef and lamb. Since Shawarma uses slices of meat or chicken, it can never be frozen. Shawarma can be served with different types of bread such as Saj, Pita, and Samoon. The sauces are usually garlic sauce for chicken shawarma and Tahini for Beef & Lamb shawarma.

If you got hungry after reading the article, checkout our Menu at Simsim Outstanding Shawarma, and try us now !

We were named one of America’s Hottest Startup Fast Casuals for 2020 on QSR! Visit us in Clairmont Mesa or Carmel Mountain to see and taste the hype around our outstanding shawarma and Middle Eastern eats 😋 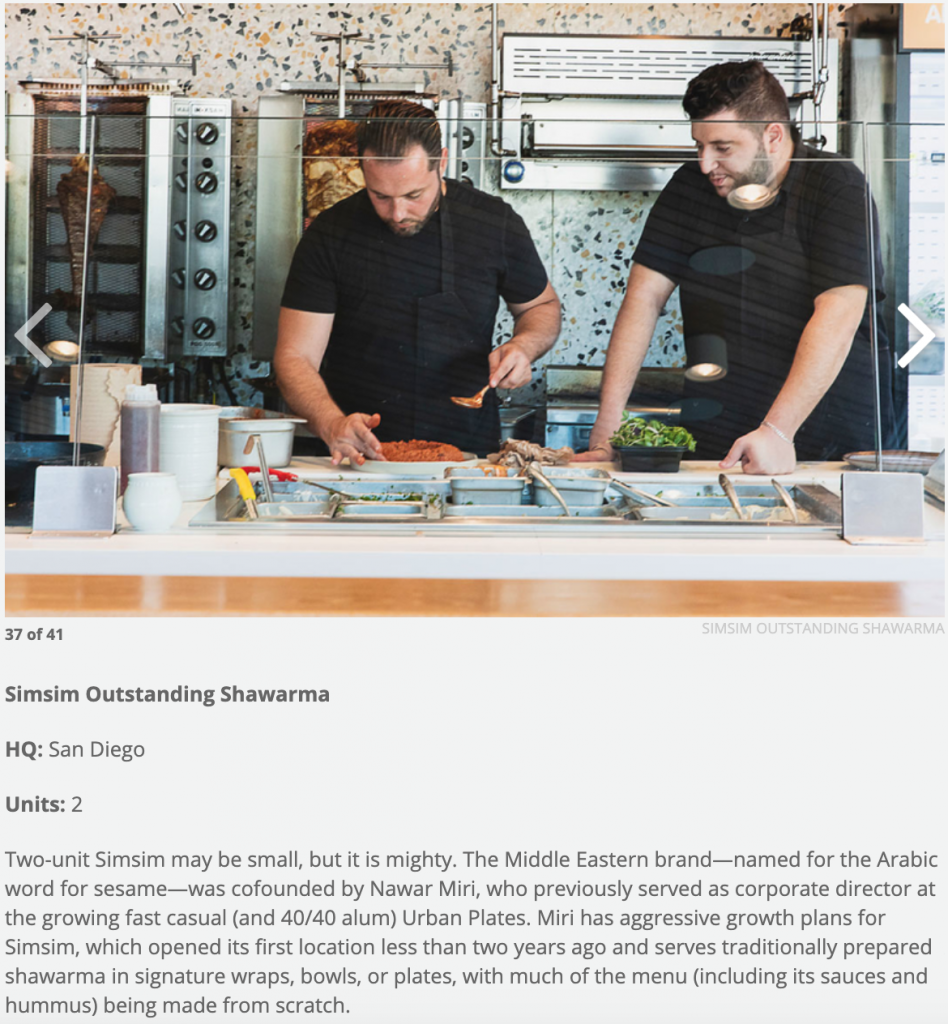 Hummus is a staple in Middle Eastern food. Simple, and delicious! And when combined with traditional ingredients and methods, its irresistible!

Hummus is our guac! Grab a side of Simsim’s outstanding Hummus today, but be warned…you won’t stop dipping!

Did you know that simsim (sesame) is a main ingredient in Hummus?

Get a side (or a bucket) of our authentic and mouthwatering Hummus today!

Resisting our Hummus is impossible !

Celebrate the Holy month of Ramadan with authentic Quzi! Gather your friends and family around or traditionally made Quzi Roasted Lamb, now on our catering menu!

Ramadan Kareem! Complete your gathering of loved ones with Simsim’s mouth watering Quzi, found exclusively on our catering menu.

Cinco de Mayo is a month long celebration at Simsim!

Come enjoy your favorite fresh Mexican ingredients wrapped into our signature Saj bread wrap! Our Cinco de Mayo Shawarma is only here for the month of May!

The Cinco de Mayo Shawarma is here!! From May 5th through the end of May enjoy fresh Mexican ingredients wrapped in our fresh Saj bread!

Shawarma is made by layering marinated strips of seasoned meat & chicken on a vertical spit (rotisserie). The meat is roasted slowly on all sides as the spit rotates in front of, or over, a flame for hours using heat.

The meat is shaved off the stack with a large knife. Our Shawarma can then be eaten with our freshly baked saj bread or in our custom bowl with vegetables and house-made sauces.